The silver fern is one of the unofficial symbols of New Zealand.

This tree-fern is endemic to New Zealand. The name comes from the silvery white color of the leaves’ undersides.

Gift shops would carry all sorts of fern themed souvenirs, either fronds or fiddleheads.

Whenever I walked in the native bush, there were ferns of all varieties everywhere. In fact, one of the pleasant surprises of my trip to New Zealand was how much greenery there was despite the Southern Hemisphere winter. The European gardens planted by the 19th century settlers trying to make it look like home were all bare. The native bush was full of evergreen plants, including trees and ferns. Even Stewart Island, south of South Island, was lush in the winter.

Here are a few fern pictures just from Stewart Island:

After a few such fern-filled walks, I felt tempted to take a fern souvenir home. On the other hand, I travelled light, and I aspire to live with relatively few possessions. Easier said than done! Even though I did buy a few non-consumables on this trip, some of them frivolously, in case of fern-shaped trinkets, it was hard to come up with even a flimsy justification.

So… I got a fern tattoo!

Here is how I went about it… I follow several tattoo artists I like on Instagram, and I added one from Wellington. I paid closer attention to their posts, so I could get a clear idea of how to describe what I want. During my first stay in Christchurch, Mary mentioned that Absolution Tattoo and Piercing at the Arts Centre is worth checking out. On my second stay, I dropped by as I was visiting the Arts Centre anyway, and asked if any artists were available. Turns out, the artist named Kieran was, and, after a quick look at his Instagram portfolio, I was in the chair. We only went back and forth on the placement of the tattoo. Once we both were comfortable with that, I just let Kieran freestyle (meaning no drafts) based on what I described verbally. I didn’t even look while he was working.

Sounds reckless, but the result was just what I wanted. 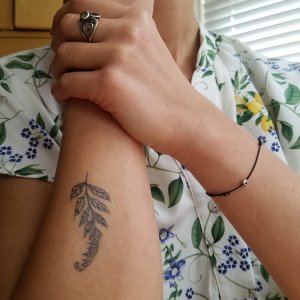 Now I have small tattoos on both forearms (you can read about the first one here). While they are in many ways different, they are also in some ways similar. Including that I can claim that Mary made me get both of them. Which she didn’t, nobody made me, but it’s a fun claim to make.

The bottom line, why bring home a trinket when you can bring a little wearable art piece.