When I was in Buenos Aires in 2010, there was something I couldn’t wait to ask Ale, our city tour guide, an architect by training, about.

The question: “Are there any sundials in the city?”  Ale’s response: “Not that I know of.  Why?”

I had no luck in Buenos Aires and for nearly 8 years since.  Until I was planning my days in Auckland, New Zealand, and saw that there was a sundial in the Eden Garden!  In fact, I saw four sundials on my trip to New Zealand.

1. Auckland, Eden Garden, near the entrance

This was the sundial I saw on the map and the first I found.  See how it’s backwards?  The only problem, this sundial is surrounded by lush shrubs, so I could barely see the shadow (more like “imagine” than “see” perhaps) even when the sun peeked from behind the clouds. 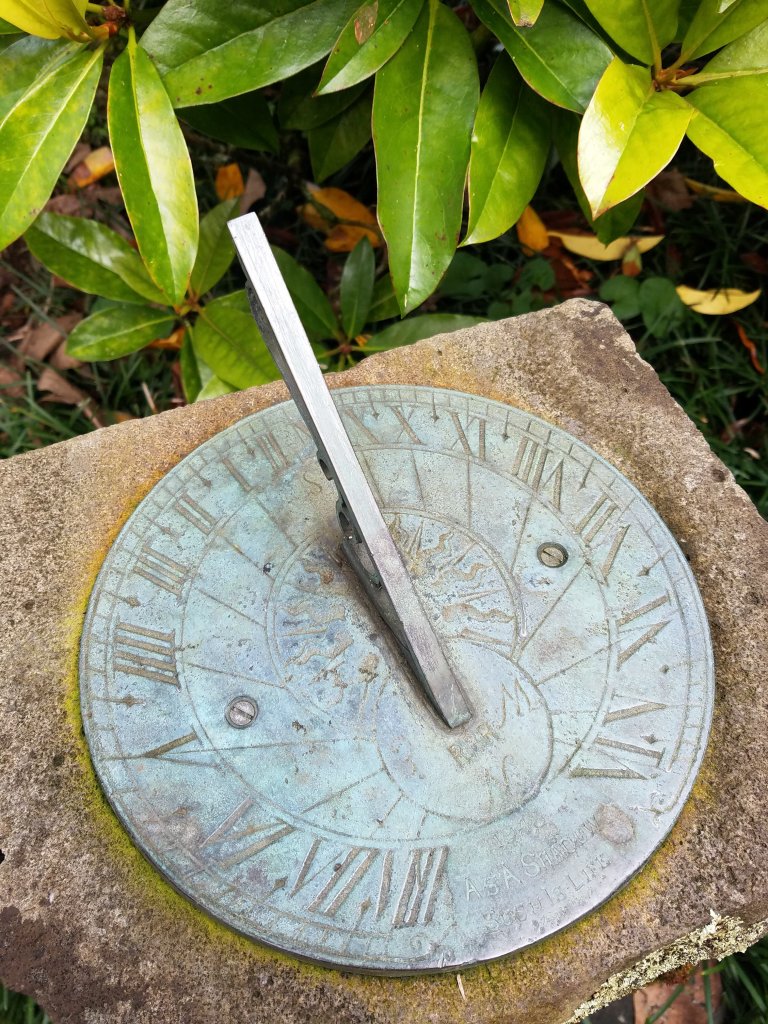 I got so excited to have found the sundial that I forgot to examine it carefully!  What sad statement about the nature of life and time does it bear, as sundials are wont to do?  I can’t quite tell.

2. Auckland, Eden Garden, up the hill

You need to walk uphill a little bit, past the sign advising you to wear “sensible shoes”, and maybe past the yellow “it’s slippery beyond” tape (I said “maybe”).  The sun shines on this one, and there is a table of corrections for the time of the year. 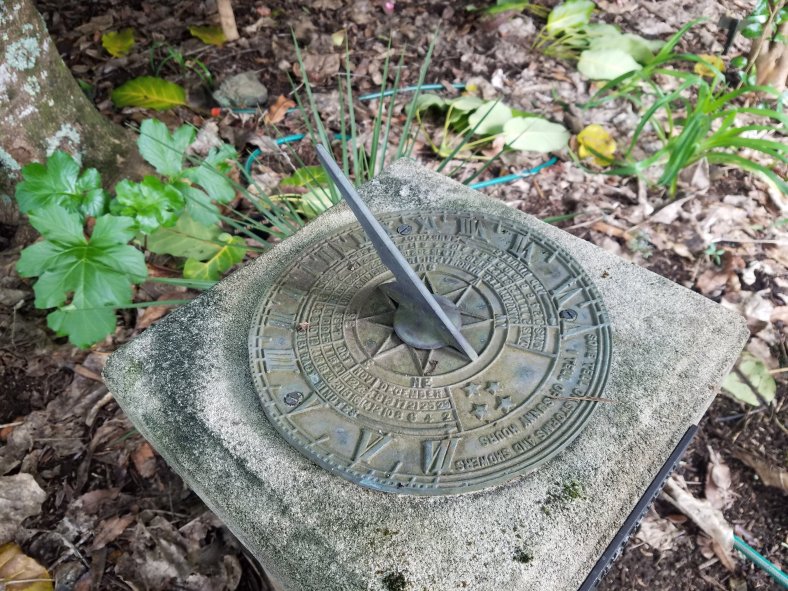 “Some tell of storms and showers I tell of sunny hours.”  OK, this one is not sad.

This large sundial is in the middle of the Rose Garden in Christchurch Botanic Garden.  As you see, it has a beautiful clear shadow when the sun is out.  The correction table is on the pavement underneath. 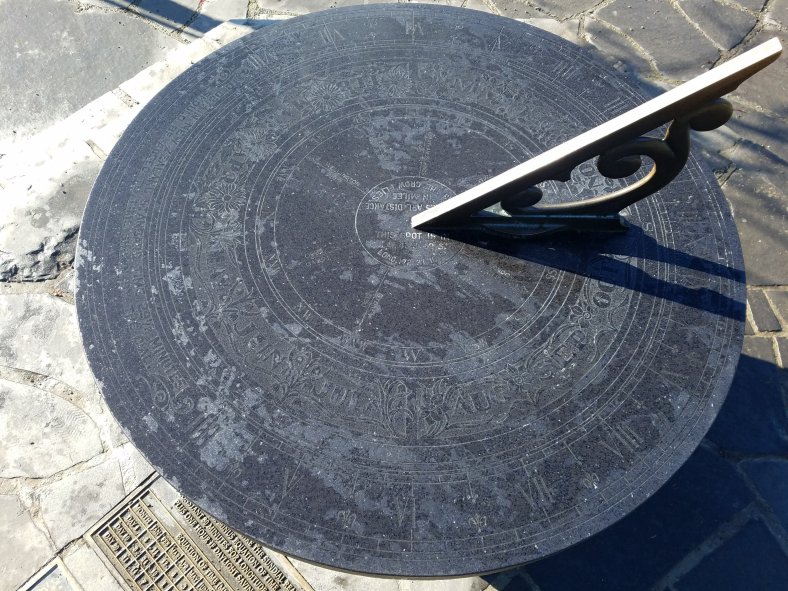 This sundial is all the way up by the Carter Observatory, and I love it!  Your own shadow shows the time, and there is a special platform with explanation where to stand depending on the date.  Unfortunately, it was overcast both times I made it up there, but maybe one of my readers has more luck? 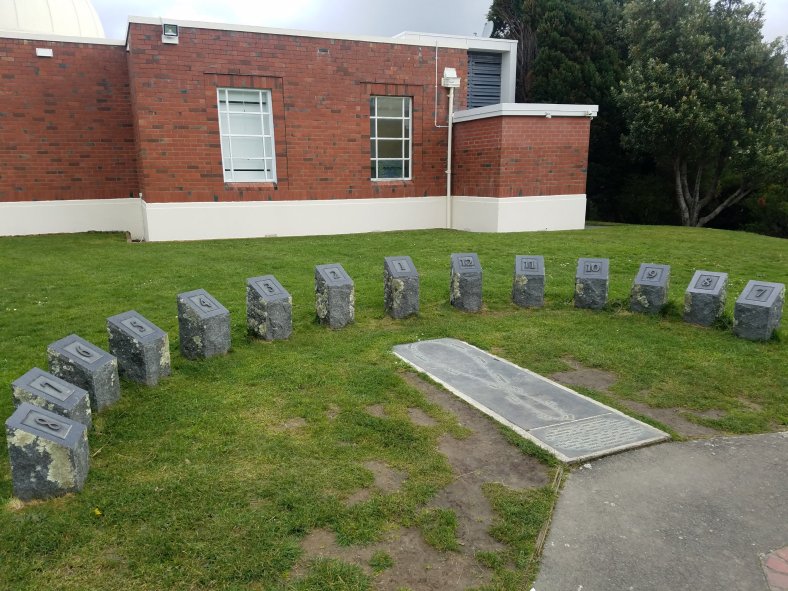 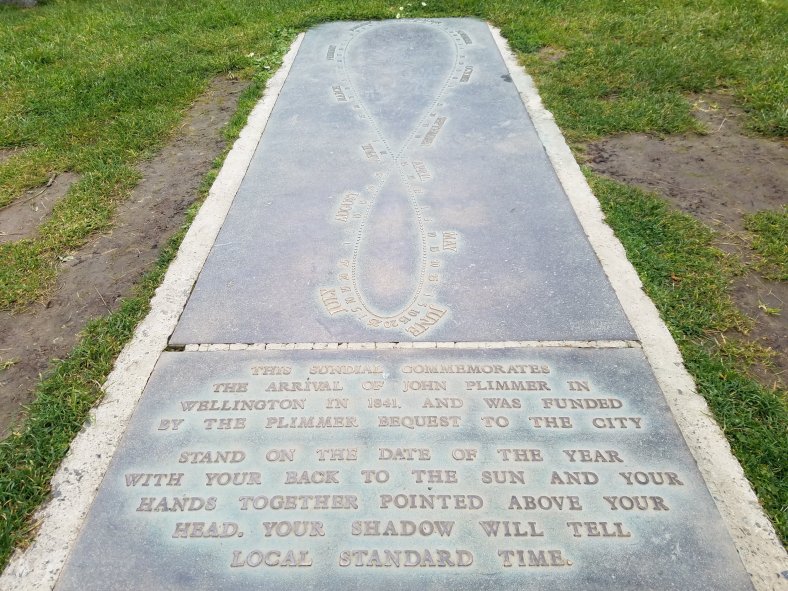 Hmm.  The internet tells me there is another sundial in Wellington Botanic Garden.  Oh well.  Let’s not get greedy now.

A thought about souvenirs

With tourism industry and consumerism on the rise, I wonder why don’t touristy gift shops in the Southern Hemisphere sell watches going the other way?  Wouldn’t a watch like that be a cool souvenir?  Why stop at sundials?  I know I would be tempted!