The first weekend of December I flew to Philly for Lesley’s memorial service.  Got there late Friday afternoon back home Sunday evening.

The collective grieving of the first 24 hours was heavy but expected.  After all, the recent memories were still recent.  Somewhat recent from all the milongas through the last one just before flying to San Francisco in January 2013, from all the walks with Lesley throughout the couple of years before that.  Even more recent from when I stayed there just over two years ago. 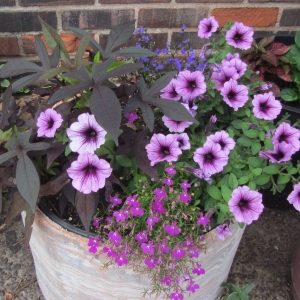 The flower pot in question as remembered and photographed by the author in Philadelphia, May 2015

The flower pot near the house (or a recent memory of that; it was hard to see for that last half a block on that Friday night).  The door.  Kelly opening the door.  The stairs, the walls, the art on the walls.  Lesley’s absence, Lesley’s almost presence.  It was maybe just a bit colder than usual.

There was a “sold” tag on the big blue-green painting.

Saturday afternoon, there were hundreds of people at the service.  It was profoundly sad.  It was beautiful.  It was the right place to be at.  It was a sad reminder of my non-belonging there – much less so now.  Anyway, it wasn’t about me, not like that.  It was good to sit with Eva.  It was lovely to stay with Sue and Bob.  It was very special to connect with Kelly and, pleasant surprise, Elizabeth.  Ah, those yoga-tango Sunday brunches of the beginning of tango.

I took a break to stop by JJ Tiziou‘s photo exhibit event (the Image of Yoga, still up there as I write this).  It was relatively quiet.  There was a huge pot of warm, delicious lentil soup.  Nobody knew me there, nobody needed to know me, no need to be anyone…

Then I went to UCAL for a milonga.  It was just something that fell neatly into the calendar.  I wasn’t thinking.

The  memories of UCAL were not recent.  I hadn’t been there since … what was that?  2008? 2009?  Now that I saw it again, the porch exploded with the memories of the More Private Scene after the Public Scene.  The stairs after the stairs promised a nice place to hide (no longer there, no longer necessary).  And the dance room…

Ten years ago, there were sparkly red and blue fabrics serving some as temporary window curtains, others as table cloths, festive lights ran above the mirrors, slightly ridiculous dark red brocade chair covers hid the folding chairs.  The sparkly fabrics and the chair covers would go into Lesley’s big box after the party.  The floor was filled with many couples dancing oh so well, many leaders who would even dance with me sometimes!

Now that I was back after all the years, a single strand of white lights ran along the floor.  The white window covers were bare as were the skeletal white folding chairs.  The room, heartbreakingly, was a ghost of itself.

The attendance was poor, not surprisingly, considering the earlier events.  As I sat on a ghost chair across the room from DJ table, watching the handful of men in attendance lead dreadfully, then some women get up and lead much better, I felt this unexpected loss.  And I also felt moved and inspired by tango music as I hadn’t for years.  Tango in San Francisco is easily some of the best in the world (I haven’t been everywhere, but willing to stand by the opinion; it is unbelievably good), and yet there I was, in Philadelphia, at the physical source of the beginning of my tango journey, and there was my tango heart.  Despite the losses, despite the scandals, despite the cringeworthy dancing presently in front of my eyes.

Meredith was DJing.  When was it that Meredith moved back to Philadelphia?  2009? 2010?  Was that after the Friday night milonga moved out of UCAL to Buttonwood street?  Might have been.

Then I danced with Meredith, and it was everything my tango heart longed for.  We were never close, I never danced with her socially before, and might not have enjoyed that as much while I was still living in Philly anyway: my tango got better in San Francisco.  It was clear, grounded, musical, joyful.  We danced a tango tanda and a milonga tanda.  It wiped away the tears from my face and my spirit.  By the second milonga I was laughing like I had no care in the world, Meredith smiled broadly.  I felt inspired to dance again, I was inspired to learn to lead.  I could take my tango heart home now. ❤

The featured image is a photo of a Stikman taken on a Philadelphia crosswalk in May of 2015.

Disclaimer: not all men dancing tango in Philadelphia are terrible leaders.