“You’ve been spending a lot of time with that woman,”  says Louise.  “Every week, is it?”

“Well, yes, sort of, most Sundays, but it’s just brunch after yoga, with other people. We usually don’t do anything else, that one time was an exception.”

“But how about last week when you ate that guy’s ice cream? Was that with her?”

“Oh, yes, it was, but we were just going from one place to another on a Friday night, the places we often go anyway, by ourselves.”

I mean, it’s not like we made special arrangements, except the first Friday we did, but that was with a bunch of other people.  Nobody else showed up, just the two of us, but still.  After that it might have been implied that we would go again, but maybe not.

True, one may say we spent a whole day together that one Sunday, 12 hours, 8 to 8.  But that doesn’t usually happen.  Although it could have been that I got there at 8 AM thinking that you might be there, but you didn’t have to be. 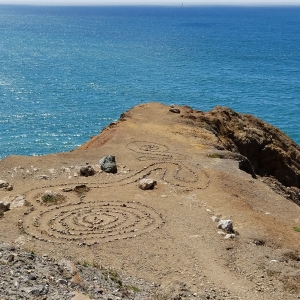 True, in the middle of the day there were just the two of us together (plus the sweet fluffy dog), and it was very very nice: we drove around, chatted, went on a long hike in the hills by the ocean.  The dog tried to hunt critters.  The dog found some special rocks to rub against.  The dog gave us a look from the outside of a coffee shop.  The coffee shop hosts the Beatles song sing alongs.  Not when we were there though.

It’s not like your invitation to come along was anything special anyway.  You invited somebody else from the brunch group.  Then I said “Oh, that sounds nice” and you said, “everybody is invited”.  So I went.  The other guy didn’t, so it was just the two of us.  Plus the dog; the idea was to walk the dog.

I am grateful for your grace and for including me.  I’ll assume this is nothing special though.  The events in past and present form no basis for the future.  Nobody is getting close.  Because I don’t know how and don’t know if I can bear it.