I tried a new bike path a couple of Saturdays ago, South to Glen Canyon, to Portola Drive, and then Vicente Street straight to the ocean.  Great Highway up to Land’s End, 48th, to Anza, to 43rd, to the Park, and then the usual.

As I set off, I pulled back from desires of this and that company, and took in the late morning sunshine and views of quiet, bright clean houses along San Jose Avenue.  It was getting increasingly warmer as I made my way up the hills, my light cotton tank all drenched.  As the route turned downhill and toward the ocean, my sweaty body got suddenly hit full on with a chilly headwind, courtesy of the Pacific, impact increased by the force of me rolling downhill straight into it.  What an unexpected new sensation: the wind that doesn’t help but can’t hinder, bucketfuls of chilly air flown upon me without struggle, just there for me to breathe in, laughing. 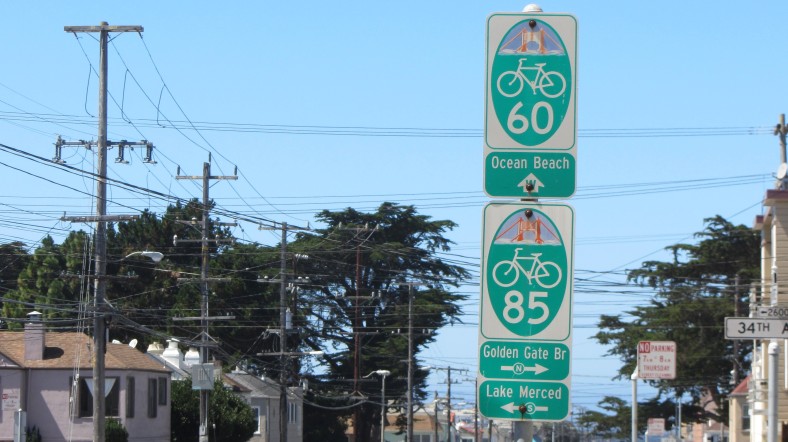 Great Highway – pretty, Land’s End – crowded, 43rd downhill into the City from the top – also new, more quietly exciting.  I went new places and felt stronger.  Got back in time for Sean’s class.

While waiting for the class to begin, I lay down, a bamboo block between the wings, stretching, feeling the muscles tired, the joints funny after the ride.  Something cracked, something opened.  Around me – pleasant smells of the studio, quiet talking of friends catching up, Sean’s voice as he goes around greeting everyone by name.  Thought: this is exactly where and how I want to be right now.  Sean made his way up to me.  I uncurled all the way up from the floor into a standing hug, chit-chatted about the prior weekend, back to the floor as Sean moved on.  Sweet.  And then – came the little demons of fear that Sean would leave.  Leave too soon, because he is change.  But then again, I am too change, not subject to change.  I find routes and fly into headwinds, I grow stronger and older, I make little shifts and big leaps.  I enter and I too leave.  Change is I, I am change.  We are equal.  There is nothing to fear.

As we started moving, I remembered to savor transitions and sensations.  And that I wanted to be there and nowhere else.

3 thoughts on “Flying into a Headwind, Being Change, a Saturday”