One observation that I made upon doing that was interesting, although not particularly surprising: many of those mirrored each other: I feel not seen – I overlook others; I feel rejected – I leave and hide; I berate myself – I am quick to judge.

The ease with which I wrote down all the grievances was quite amusing. Turns out, I am pretty good at holding the grudge.

Which leads to the next homework topic, forgiveness. Can I forgive the hurts? What would it take?

I picked a recent grudge. An ex lover snubbing me on a long trip back to California from Europe. Including sneakily changing seats on the transatlantic flight to sit further away from me. Including disappearing during a 3 hour layover. As a punishment for my snapping at him in the morning. I’m not going to spend any time here explaining why I snapped or how I apologized – not the point. The point is, months later, that steady and deliberate withdrawal of affection still hurt.

Could I forgive that? Not at this time, I wrote. What would it take? Well, either a lot of time, or a sincere apology including acknowledging his cruelty and my hurt feelings. The latter is practically impossible. In theory, I get the idea about holding resentment and drinking the poison and all that. In practice, here I am drinking the poison.

I wrote that on a Sunday morning and went to Seane Corn‘s workshop. Seane offered that we “pray” during the sun salutations.

The first prayer was for someone we love and whose love still shines upon us, even though they may be gone from this life. I prayed for my Grandma Valya.

The second prayer, a few sun salutations later, was for someone we can’t forgive. Oh? How fortuitous. Seane invited us – not to forgive – to bring them into our hearts, recognize their struggle, and bring them into the room as sacred, as our brothers and sisters who shared the struggle; to bring him into the room as sacred so one day I can let go of the caustic connection that brings my heart down. One day.

When I returned home, I wrote a letter (not to be sent to the ex lover), describing how his actions hurt me. It ended with:

Today, the caustic connection holds me down less; holds me back less.

Don’t let go… Bring it in as sacred. 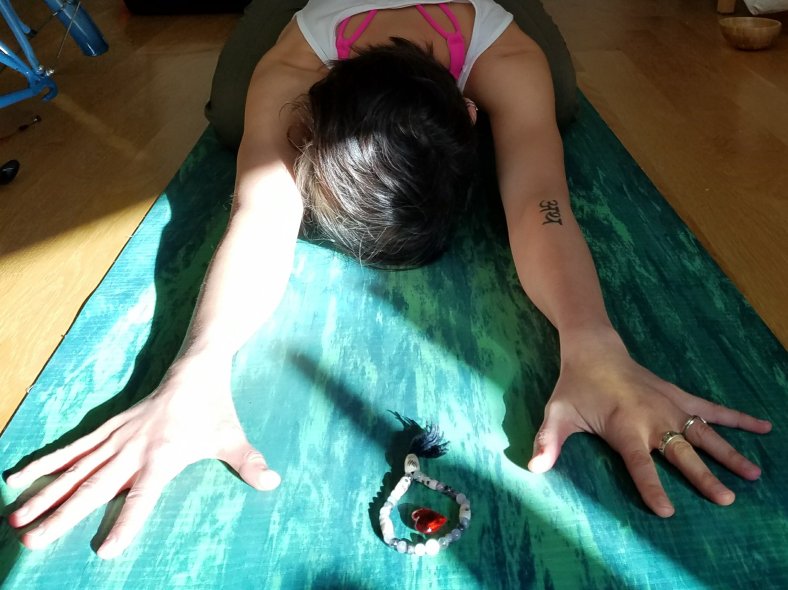