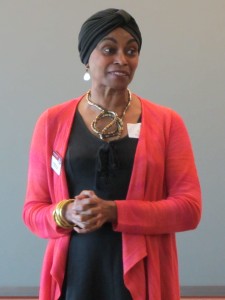 Last night, on my way to a milonga, I received a message from Kathy:

“I don’t know if you saw the post by <so and so> that Nola passed away this morning. We don’t know details but I know you were good friends and you were her mentor.”

I didn’t know that.  I knew that Nola was retired, so she must have been older than she appeared and lived, but no, I didn’t see that, didn’t see that coming.  She was 67.

Years ago Nola worked as a math teacher somewhere on the East Coast.  One year, she took a sabbatical, but of course couldn’t sit still.  She found out that GM were starting an educational program for their workers, including math classes.  Nola thought it would be neat to go teach there for a while.  She flew out to Detroit for an interview, talked with a few people, flew back.  Next thing she knows, there comes in the mail a thick offer package.  Rather than teaching, wouldn’t Nola mind setting up the whole program, curriculum and all?  A one year of sabbatical extended into 3 or 4.  Nola, a black woman, maybe 5 feet tall and stick thin, walking those floors and telling all those big guys what to do and how to do it.

I met Nola in July 2010, when I was a brand new area governor. Nola was a brand new club president.  On the day I visited her club, she was giving her seventh or eighth speech.  She joined Toastmasters in March of that year.  What happened was, she didn’t realize at first that she did not have to give a speech at every meeting.

That was my best year of leadership in Toastmasters.  It was tough, but I did well, and I met many wonderful people.  Nola’s club adopted me at conferences and such, because there would be say 8 of them, and just I from my home club.  They were my best supporters out there.  The seeds of friendship between our two clubs were planted then.  Cheryl, Tony, Brooke all visited us since then.  It makes me smile how they all know each other now, and I’ve been gone for a year already, and Nola is now gone for good.

Nola and I were in many way similar; I like to flatter myself so.  Mathematicians turned communicators, bright eyed, quick talkers, quick thinkers, getting stuff done, impatient, but meaning well.  Nola always, I on a good day.  I loved having her as a friend, even though we only saw each other once every few months.  She became the area governor after me.  When she was appointed, we met for lunch, for transition.  That’s when she told me that math teacher sabbatical at GM story.  I am repeating it from memory: only heard it twice, that one time, and once more, when I asked Nola to tell it again.  Details may be wrong.

Nola went to become the Division governor in 2012-2013.  We tried to mentor a club together; that was fun, but didn’t go very far: the sponsors wouldn’t follow through and I already had California on my mind anyway.  Nola was one of the first people I told about that.  Well, she was determined on convincing me to be the division governor after her, so I had to come clean.  She stopped by for a chat before I left.  Told me about a women’s leadership group she was organizing, and the business she was starting, and how the division governing was going.

I received a LinkedIn message from her in July:

I love love your picture. Good to get an update. Hope all’s well and going smoothly at the workplace.

I have been nominated for Division Governor of the Year for District <X>. I got 3 new clubs for the Division, and was the only division in the district with all paid clubs and a gain in overall membership, also the only Division that made President’s Distinguished. I am working on my high performance leadership award and doing a youth leadership project.

Hope to hear from you soon,

When somebody as brilliant and unstoppable passes on, their light becomes ours to carry on.