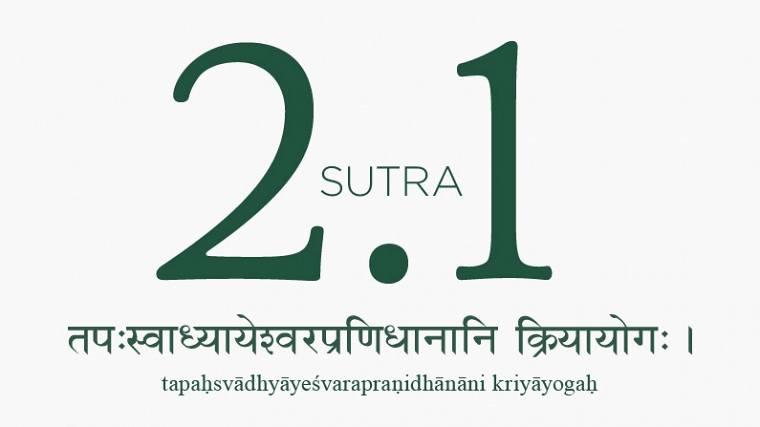 This sutra came up a couple of times in our teacher training.

In the philosophy class, Jason spoke of “tapas” as having origin in the sacrificial fires.  He talked about sacrificing the mind to the practice of knowledge, about tapas being the fire that we use to be creative, about the energy upon which we draw to be our best.  Establishing a ritual with discipline creates a framework for self-study.  Enter “svadhyaya”.  When we do something repeatedly, as a ritual, we can see ourselves in that framework, because we are the only part that changes.  “Iśvara” is a “non-deified deity”, pure awareness, Jason said.  So, all that ritual and self-study is about dedicating oneself to that.

Darcy brought up the sutra up in psychology of relationships.  In that context, “tapas” is the driving passion, “svadhyaya”, the grounding, self-reflection, “iśvara pranidhānā” is the connection to something bigger than ourselves, e.g. community.

Last week in a public class, Leila brought up “iśvara pranidhānā” as “trusting the process.”  Which seems to be one of those new new-agey terms, but also a good reminder sometimes to let whatever is unfolding unfold, to witness that without overthink it much.  After a fair amount of somewhat disciplined effort and self-study, I suppose.

Since I’ve finished the basic training several weeks ago, I’ve been contemplating what’s next.  What could I do with what I’ve learned short of career change?  (A career change at this point doesn’t seem appealing: don’t want to waste those gifts either.)

I wanted to keep learning, to teach, but also to apply myself in a meaningful way while doing that.  In San Francisco, there are plenty of more qualified teachers than I trying to make living teaching the middle class middle aged folks in dozens and dozens of studios – one per city block almost. I don’t need to compete there, and it doesn’t seem to be the place where the work needs to be done anyway.

Within a week or two of my graduation, I asked two of my teachers if I could assist them in public classes.  I also offered to a small handful of friends and work acquaintances that I could practice teach them.

Both teachers I asked said no.  One wasn’t ready to take assistants; the other had too many assistants by the time I’d asked.  There was nobody else I wanted to ask at the time.  That was quite a set back.  Assisting seemed like the most obvious and the easiest thing to do, something I was certain I’d jump right in; turned out, that wasn’t available.

I very nearly cancelled the first sessions of both “practice teaching” arrangements.  For a number of excellent rational reasons I came up with on the spot, but mainly for overwhelming self doubt.  Scratch that, I did cancel the one at work, and only went back to that because the prospective students inquired enthusiastically.  After 4 weekly classes with 2-4 people, I expanded the class at work.  To 5-6, but still.  Almost cancelled the first expanded class: because I totally had a bit of a cold or something.  That class I didn’t cancel was one of my best so far.  Partly because that’s how it tends to work: you are terrible, you practice, you get a little bit better.  In general.

Meanwhile, the 2nd teacher who said no to me assisting, emailed not even two weeks after that and said I could start helping him.

Then, a week after I started there, the 1st teacher I asked came up to me after a class and said she might be ready for assistants in a few weeks, in case I was still interested.  Through this teacher, I’ve learned about a Yoga for Teens program: she helps with their events sometimes.  They have a short teacher training program for that.

Is that a place where I can make myself useful?   After all, it was in my teens when I met so many teachers that made a difference in my life.  And those who could have but didn’t.  Have I got what it takes?  Is it too much?  Would I be able to follow through?  Who would stand by me?

Tapas is about asking what needs to be done, then getting out there and shine (or attempting to anyway), whether or not I am tempted to take it easy, to cancel, to hide, to give up.

Iśvara pranidhānā is about surrendering to being unable to predict the results or circumstances, as I do my work, knowing it’s going to be wonderfully unknowable.