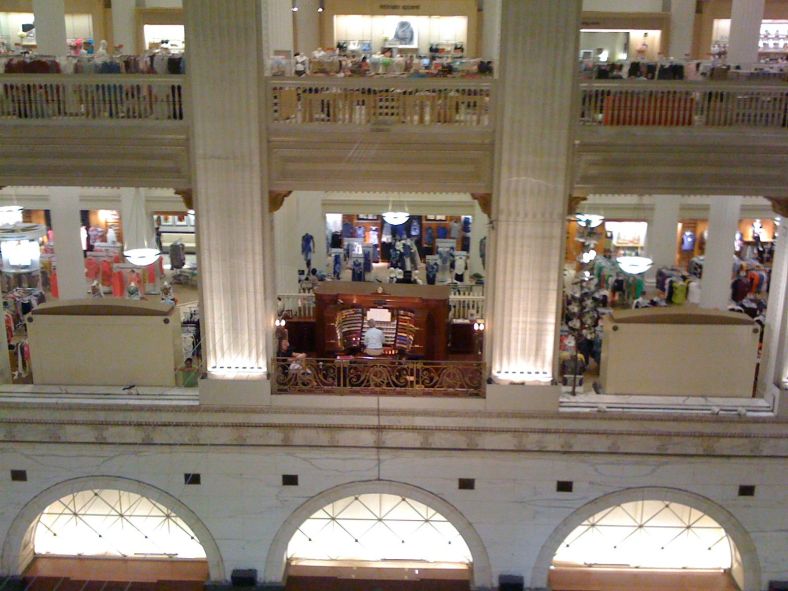 The view from the Children’s, 3rd floor

The entry for “wan” in the  New Oxford American Dictionary is followed by “Wanamaker”.

Wanamaker, John (1838-1922) U.S. businessman.  A pioneering department store merchant, he co-founded a men’s clothing store in Philadelphia in 1861.  After his partner’s death, he made it into a department store 1877 and opened another in New York City 1896.  The success of his stores was based on advertising.  He also served as U.S. postmaster general 1889-93.

This is followed by the entry for “wand”.

Katya was in New York for her sister’s wedding.   She called me from there to plan a short trip to visit me in Philadelphia.  “I want to see the organ!” she said.  “What???” “The largest operational organ in the world is in Philadelphia!  I want to see it!”

(Katya studies organ.  A year and an autumn later, I sat by her side on the top floor of a church in St. Petersburg, as she practiced for an exam.  She showed me the stops and the pedals.)

I called David: what is she talking about?  Why, the Wanamaker building, of course, right by the City Hall.

The whole building is not only now a Macy’s  store, but also the organ.  There are concerts there every day except Sunday, at noon and in the evening.

The word “store” is mentioned 4 times in the article following “wan” in the New Oxford American Dictionary.  The word “organ” – not once.